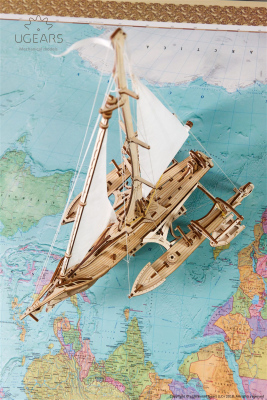 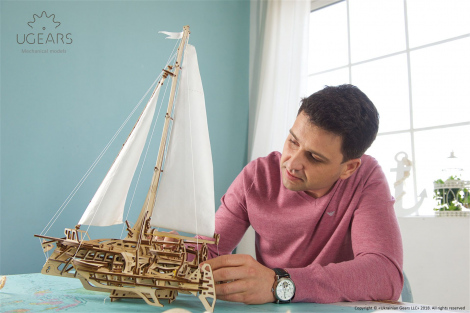 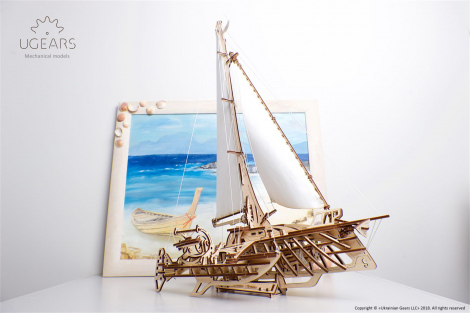 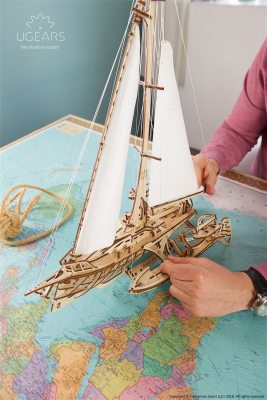 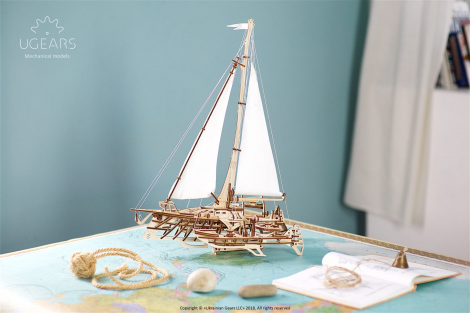 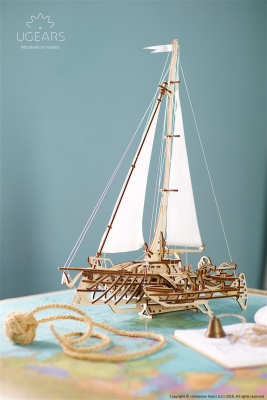 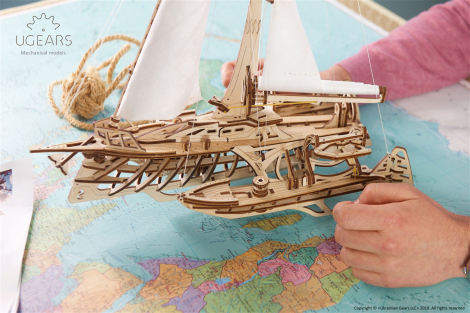 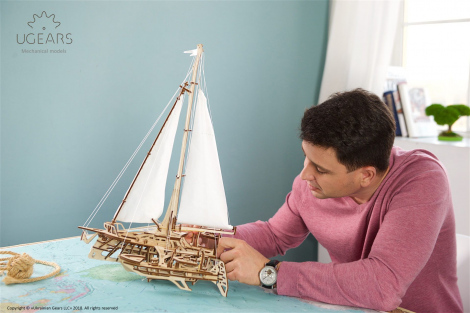 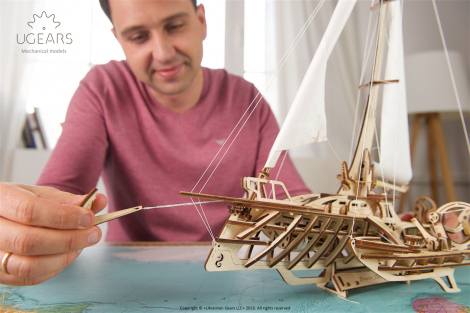 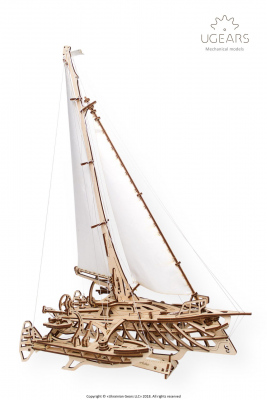 Carried by the wayward wind of travel, the graceful and stylish Trimaran Merihobus from Ugears invites you to leave your peaceful harbour and sail away on an exciting marine mechanical adventure.

The bench model Trimaran is a classic multihull sailboat designed to show off a great deal of details such as winches, rigging, and hulls, which makes her a very realistic miniature copy of real-life prototypes.

Sail away with this outstanding graceful sea beauty. Where will she take you today - around-the-world cruise? overseas expedition? Leave the rough seas of the daily grind and voyage to faraway lands with the Trimaran Merihobus from Ugears.

The body of the sailboat is made in the “skeleton” style to ensure good visibility of the mechanism and the design of the sailboat, including such details as bulkheads, frames and beams. The rear rudder blade is steered by the ropes connected through the pontoons to the master wheel on the stern. The hydrofins on the side of the pontoons make the model stable and steady while creating a visual effect of the elevation of the model. The side pontoons are attached to the main body with a load frame designed to match the style of the hulls. Also, they carry a boat davit mechanism with a winch.

The mainsail and fore staysail on the mast can be set or taken in, just like on real trimarans. The mainsail of the Trimaran Merihobus is set on the mast groove with the main top halliard. The staysail “rolls up” on a stay. At the front under the bowsprit you will find the staysail’s winch drum. Sail booms are operated by a lever that pulls the sheet of the boom.

The anchor cable winch based inside the Trimaran’s body has an automatic-tensioning mechanism that picks up an anchor. The Ugears’ designers used a strong but thin white thread for the rigging of the Merihobus. This ensures the structure of the boat remains neat and light even with a lot of details while making the mast and other elements remain in their positions.

And of course one mustn’t miss a lovely little finishing touch - a tiny seahorse carved in the bow of the boat. The curious sea creature known also as the merihobus gave your boat her name.

The Ugears Trimaran Merihobus model kit is made of high grade wood and has everything you might need for assembly. The quality of the parts is top-notch: a laser method is used for cutting items from a plywood board that provides precise hairline cuts. The details have to be pulled out of the boards and assembled to create a complete model. Like all other Ugears models, the Trimaran Merihobus comes with step-by-step, full-color, truly easy to follow instructions in 11 languages (English, German, Ukrainian, French, Polish, Spanish, Russian, Turkish, Italian, Chinese and Korean) and requires neither glue nor special tools to be fully assembled into functional sailboat.