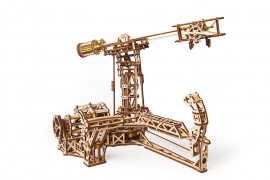 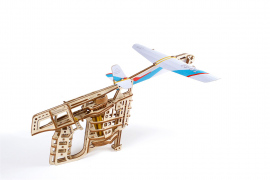 When the sky is calling! Build your own 3D puzzle - Plane from UGEARS.

The sky is immense, alluring, so close and at the same time far away. Probably, every person at least once in his life, raising his eyes up, dreamed of conquering the sky and seeing the earth from a bird's eye view. Or from an airplane. Usually, even in childhood, we are interested in how planes - these powerful iron birds - can stay in the air, cutting the sky.

The history of aircraft begins in the distant 1505, when the famous Italian inventor Leonardo da Vinci published the treatise "The Code on the Flight of Birds", where he proposed a project for an aircraft - a prototype of a modern hang glider. Only 400 years later, an airplane was invented that was the first in the world to fly - it was the Flyer biplane, built by the Wright brothers from the USA. It was equipped with a gasoline internal combustion engine and was able to stay in the air for 12 seconds, breaking 37 meters.

Inspired by the limitless blue of the sky and its conquerors - aircraft, UGEARS engineers have created unique wooden buildable aircraft models that will be a great gift for any intrepid dreamer pilot.

Assembling the UGEARS 3D Wood Plane Construction Set is a fun activity for adults to relax and take their minds off the hustle and bustle of everyday life. For children, this process will be interesting as learning, because the models clearly show how the planes are arranged and how they work.

"Aviator" 3D mechanical puzzle from UGEARS consists of three modules: the main control panel, an airplane and a helicopter. Just select an aircraft, mount it on the boom and fly. UGEARS engineers recommend starting with a helicopter launch - and moving on to an airplane later.

The structure is controlled by levers: the control wheel with the help of a swashplate regulates the roll and pitch of the aircraft, and the engine control lever controls the engine speed and sets the speed.

Another aircraft model for assembly "Airplane Launcher" - is interesting in that it is a mechanical manual catapult for airplanes, both paper and light gliders.

This wooden aircraft kit includes a plywood and cardboard glider and two heavy paper planes. The wound mechanism pushes the plane forward and sends it flying up to a distance of 30 meters. You can also launch your own wooden or paper airplanes. To do this, we recommend using lightweight materials and not loading the aircraft with unnecessary parts.

Like other mechanical 3D building kits from UGEARS, the prefabricated wooden aircraft models are made of high quality wood tested in European laboratories.

In the kit you will find plywood sheets in which the parts necessary for assembling aircraft are cut out with a precise laser method. All parts of the layout can be easily removed and folded together without glue and without the use of any other additional tools.

Also included is a step-by-step illustrated instruction in 11 languages ​​that will help you easily assemble the model.

You can get all the necessary information and buy constructors on the website woodlogic.sk.

Take off on an unforgettable flight with the UGEARS Mechanical Airplane!