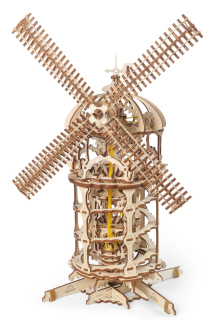 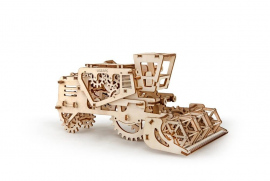 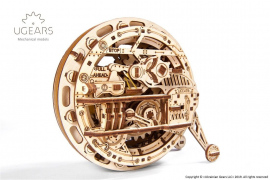 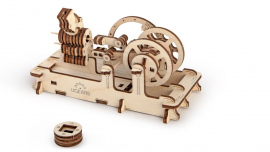 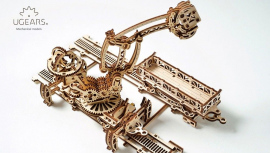 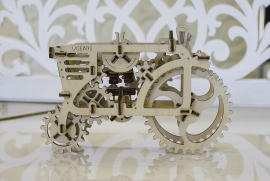 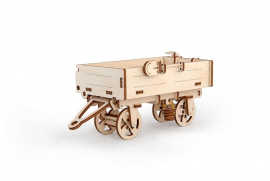 Nine Ways to Explore the World of Intelligent Machines.

Since ancient times, people have been interested in how the world works, what the things that surround us are made of, and how the mechanisms that we encounter every day work. UGEARS creates wooden puzzles that clearly show the principle of operation of a particular mechanism, help to understand the intricacies, and teach. You can choose any to your taste.

For example, the 3D constructor "Engine", which is an analogue of a steam engine. It is enough to blow into a special bell to make the engine work, and you have considered the principle of its operation. And "Silomer" allows you to understand such principles of mechanics as a cascade of gears and a mechanical connection. By blowing on the top gear, you will see how the whole system is set in motion.

The design of the "Mill Tower" 3D model is as close as possible to the ancient British windmill, namely the Chesterton windmill, built at the end of the 17th century. The model is driven by a rubber motor, but the blades can also be started manually, for example, using a conventional hair dryer.

When developing the next 3D model "Monowheels" - engineers were inspired by the original vehicle, invented at the end of the 19th century. At first, the unicycle was controlled with the help of hands, and over time it evolved and became more like a bicycle. The Monowheel 3D constructor can move on hard surfaces and even on asphalt - from 1.5 to 5 meters.

"Robot Factory" is a real highlight of the UGEARS collection of intelligent mechanisms, because it is not just a constructor that can be assembled once, but a fully automated workshop for assembling wooden robots, that is, playing with it will always be interesting and new. The conveyor carries out large-node automatic assembly of robots, after the completion of the conveyor, it is necessary to fix the arms and legs with gears.

"Manipulator on rails" also works after assembly - it builds a hangar. The set includes the manipulator itself, two spans of rails, a hangar, two cargo boxes, a crane, a cargo trailer and five hero characters.

Mechanical models of industrial transport deserve special attention. For example, the mechanical 3D wooden construction set "Combine" is able to move and transport grain. The model is started with the help of a rubber motor, while the reel is running in parallel. The mechanical 3D model of the harvester has stopper levers and opening of a special compartment for storing grain on the sides of the body.

3D-puzzle "Tractor" also has its prototype in real life. This machine has three drive modes - Neutral, Quiet and Fast. For the Traktor wooden mechanical constructor, engineers have developed a "Trailer" with a drop side that can be attached with a slight movement. It has a pitchfork, a shovel, a bucket and a broom.

All mechanical 3D construction sets from UGEARS are made of high quality wood. Country of origin - Ukraine. Assembly does not require glue or any other tools. Includes step-by-step illustrated instructions in 11 languages.

Wooden construction sets for adults from UGEARS are not only fun entertainment, but also an original gift for relatives, friends and colleagues.

You can get all the necessary information and buy constructors on the website woodlogic.sk.

Come visit us and build your own collection of buildable industrial vehicles and sentient mechanisms from UGEARS.