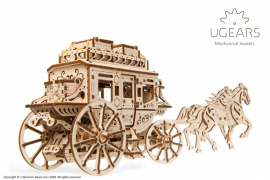 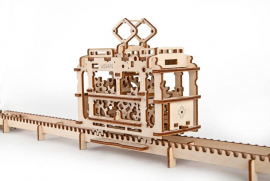 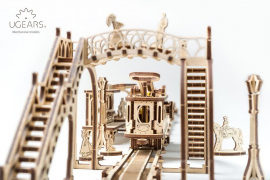 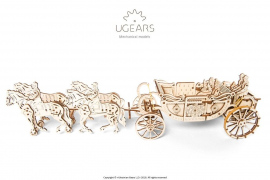 Transport legends - ancient, but not forgotten Tram and Carriage.

People have invented dozens of types of vehicles. Today, you will not surprise anyone with high-tech electric cars, but once, thousands of years ago, it all started with horse-drawn chariots.

The chariots became the prototypes of the carriages, they, in turn, were used as public transport. But there is another type of transport that first moved with the help of horses. This is the good old tram. At the beginning of the 19th century, a wagon was first built, which was pulled by horses along the rails. It was only with the advent of electric current that mankind received trams similar to those that drive our streets today.

To understand in more detail how these vintage vehicles are arranged, the mechanical 3D constructors from UGEARS, which you can assemble with your own hands, will help. Wooden models of carriages and trams for assembly without glue are thought out to the smallest detail and repeat the functionality of the prototypes, that is, they can really move.

The "Post stagecoach" can be set in motion with just a few turns of the key. On the roof of this carriage there are two boxes for letters and notes, and in the cabin you can carry various pleasant little things - for example, sweets.

But the real royal carriage of the British ruling dynasty, made in 1902 for the coronation of Edward VII, became the prototype of the “Royal Carriage” model. The set includes figurines of Queen Elizabeth II and her husband Philip the Duke of Edinburgh, as well as Prince Harry and his wife Meghan.

The mechanical designer carriage is driven by a compact rubber motor, capable of traveling up to 4 meters thanks to a free-axle gear mechanism that allows the carriage to move by inertia after the engine has worked its course.

"Tram on rails" can also travel a few meters and carry a light load - a note, candy or other pleasant things. The mechanical model of the tram is started by a special wheel on the roof. Also located on the roof are a factory direction switch lever, a tram start lever, and a "pantograph" position lock.

The prefabricated model of the tram can also work as a funicular: at both ends of the track there are special levers that can be used to raise the road and lower the trailer along it.

"Tram Line" is part of the whole "Mechanical City". The wooden 3D-puzzle tram is started by a gear valve and starts moving after raising the pantograph located on the roof. One full plant of the rubber motor is enough for the tram to drive along the track, drive into the depot, leave it and drive to the turn of the track.

There is also a tram stop in the Mechanical City with a ticket kiosk on the platform, a clock, a shop and a small staircase; tram depot; footbridge in the form of arches with a bridge and side steps; straight and radius rails; Street lights; as well as seven figurines of different characters.

All mechanical 3D construction sets from UGEARS are made of high quality wood. Assembly does not require glue or any other tools. A step-by-step illustrated instruction in 11 languages ​​will help you assemble the model.

Wooden construction sets for adults from UGEARS are not only fun entertainment, but also an original stylish gift for relatives, friends and colleagues.

You can get all the necessary information and buy constructors on the website woodlogic.sk

Come visit us and learn how the mechanisms work together with wooden construction sets from UGEARS.